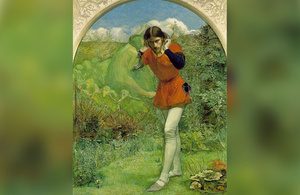 A temporary export bar has been placed on John Everett Millais’ painting ‘Ferdinand Lured by Ariel’ to avoid the risk of it permanently leaving the UK. Valued at £9.5mn, the work is at risk of being exported unless a UK buyer can be found to keep it in the UK, where it would be put on public display.

The decision on whether to allow export licence applications for the painting has been deferred until 15 November 2019. Until then, the painting must remain in the UK, and the decision could be extended till 15 May 2020 if a serious intention to raise funds for the painting’s purchase is expressed by a UK buyer.

The decision was made by the Arts Minister, Rebecca Pow, following advice from the Reviewing Committee on the Export of Works of Art and Objects of Cultural Interest (RCEWA). The committee made its recommendation on the grounds of the painting’s significance within the Pre-Raphaelite Brotherhood and 19th century British art. The government’s press release about the decision also says that the committee noted ‘Millais’ extraordinary skill in capturing a moment in the text of the play [Shakespeare’s The Tempest] and that the novelty of the artist’s depiction of the subject was a rich vein for future research.’

The RCEWA is an independent body advising the Secretary of State for Digital, Culture, Media and Sport on whether cultural objects have ‘national importance’ and is serviced by The Arts Council. Minister Pow said:

“Millais is one of the most famous and recognisable members of the Pre-Raphaelite Brotherhood with his work still aweing audiences hundreds of years later.

“This artistic movement is a key part of British history and this is why we must keep this important work in the country.”

Father of the Pre-Raphaelite Movement

John Everett Millais (1829-1296) is considered the father of the Pre-Raphaelite movement. He entered the Royal Academy at the age of 11 as its youngest ever student and went on to become one of the most influential artists of his day. The Pre-Raphaelite Brotherhood was a group of English painters, poets and art critics who aimed to paint nature expressively and focussed on ideas and aesthetics that defied the conventions of the day.

‘Ferdinand Lured by Ariel’ shows the character of Ferdinand from William Shakespeare’s ‘The Tempest’ being lured by Ariel – the servant of the magician Prospero. It is notable for its radical use of colour and approach to detail and is one of only four of Milais’ works to be completed during the short five-year lifespan of the Pre-Raphaelite Brotherhood that has remained privately owned.