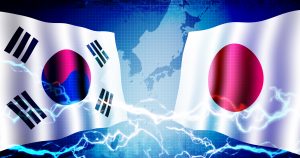 In October 2018, Tokyo and Seoul were involved in a court case where South Korea’s top court ordered a Japanese firm to pay compensation for the forced labour of South Koreans during Japan’s 1910-1945 colonial rule of the Korean Peninsula.

Japan thought this matter to be resolved in 1965 with a pact which saw Tokyo pay Seoul US$500m in “economic cooperation.”

Since this dispute, the relationship between the two nations has remained frosty, with a scheduled meeting on 16th December in Tokyo to be the first time they will have met in three years and the first since Japan introduced tighter controls on tech-related exports to South Korea in July this year.

Developing from this feud, both sides are looking to tighten export restrictions and to remove each other from their preferential lists of trade partners.

Matters have not been helped by Seoul deciding to terminate the General Security of Military Information Agreement (GSOMIA) just hours before the deal was due to expire.They quickly reversed their decision but ties between the two nations were damaged in the process.